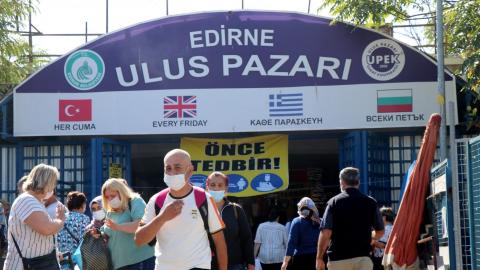 "Sixty or seventy per cent of our customers are now Bulgarians," says Yilmaz Sanis, president of the Association of the Historic Ali Pasa Bazaar in Edirne, Thrace, and owner of a shoe shop in the bazaar.

"They contribute to the market a lot," he told BIRN. "It is a great advantage for Thrace at a time when our jobs are suffering from economic conditions, and the pandemic."

Eastern Thrace is the last remaining bit of Turkey-in-Europe, which up until the wars of 1912-1913 included much of the southern Balkans. Its bustling main city, Edirne, the Ottoman Turks' capital before Istanbul and once known in the West as Adrianople, lies only a few miles from the Greek and Bulgarian borders.

According to Turkey's Ministry for Culture and Tourism, more than a half million Bulgarians visited Turkey in August and September this year. Most headed for the Turkish border cities of Edirne and Kirklareli in Thrace for a day of shopping.

Since the borders closed because of the COVID-19 pandemic reopened in June, and as the Turkish lira continues to slide, shopping in Turkey has become much cheaper for Bulgarians.

Atakan Sevgi, a researcher on the Balkans originally from Edirne, told BIRN that Balkan bargain hunters have long gone to Turkey to shop.

"This is not a new trend. Since the fall of communism, Romanians, Bulgarians, Macedonians and even Serbians have been coming to Edirne to shop," he said.

"However, with the lira losing significant value, the numbers of day-shoppers from Bulgaria has skyrocketed," he added.

The main reason for this explosion in numbers is the depreciation in the value of the lira, he maintained.