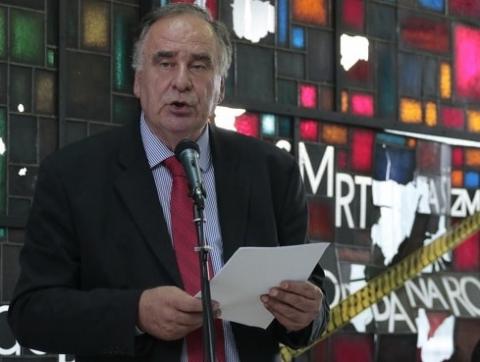 Famous for his critical role during the breakup of the former Yugoslavia, 63-year-old Bogic Bogicevic faces huge challenges as he returns from political retirement to take up the important position of Mayor of Bosnia's capital, Sarajevo.

Bogicevic is expected to be formally elected to the position within the next month or so, as soon as the local election results are validated.

The reputation of one of the youngest and most prominent Bosnian politicians of the 1980s goes way beyond Bosnia, or even the Balkans.

An ethnic Serb from the northeastern Bosnian mining and industrial town of Ugljevik, born in 1953, Bogicevic was the youngest candidate in the 1989 referendum in Bosnia on who should be its representative to the Yugoslav state presidency.

His landslide victory set the stage for him to become a key actor in one of the most dramatic moments in the breakup of former Yugoslavia.

This was the Yugoslav state presidency session on March 12 1991, called to decide whether to impose martial law on the request of the Serb-dominated Yugoslav National Army, JNA.

As was later proved, this was part of a plan prepared by Serbian strongman Slobodan Milosevic, under which the JNA would then physically remove leaders of most of the other Yugoslav republics.

The vote was secretly filmed by JNA cameras, and was publicly revealed in a famous BBC documentary series, "The Death of Yugoslavia," which in 1995 exposed details of the collapse of Yugoslavia, its subsequent wars and peace accords.

During the presidency session, Bogicevic was under immense pressure, first because the Serbian leadership expected him, as an ethnic Serb, to vote along with them - second because he had to vote according to his own conscience and...