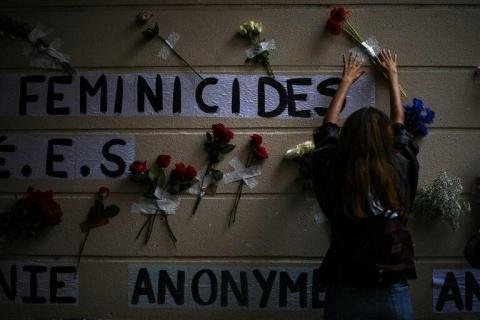 No country has been spared the coronavirus epidemic, nor the scourge of domestic violence, which has surged during lockdowns as the day marking such violence approaches on Nov. 25.

From a spike in rapes in Nigeria and South Africa, increased numbers of women missing in Peru, higher rates of women being killed in Brazil and Mexico and overwhelmed associations in Europe: the pandemic has aggravated the plague of sexual violence.

According to UN data released in late September, lockdowns have led to increases in complaints or calls to report domestic abuse of 25 percent in Argentina, 30 percent in Cyprus and France and 33 percent in Singapore.

In essentially all countries, measures to limit the spread of the coronavirus have resulted in woman and children being confined at home.

"The house is the most dangerous place for women," Moroccan associations noted in April as they pressed authorities for "an emergency response".

In India, Heena - not her real name - a 33-year-old cook who lives in Mumbai, said she felt "trapped in my house" with a husband who did not work, consumed drugs and was violent.

As she described what she had endured, she frequently broke down in tears.

After buying drugs, "he would spend the rest of his day either hooked to his phone playing PubG (PlayerUnknown's Battlegrounds) or beating me up and abusing me," she told AFP by telephone.
On August 15, her husband beat Heena worse than before, in front of their seven-year-old son, and threw her out of the house at 3:00 am.

"I had nowhere to go," she said. "I could barely move my body - he beat me to pulp, my body was swollen."
Instead of going to the police, she made it to a friend's home and then to her parents.