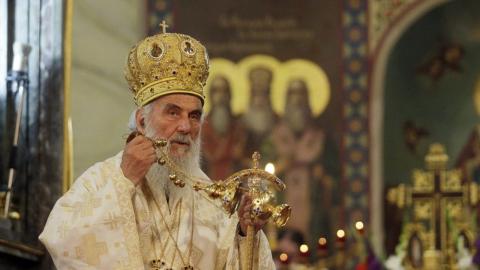 Serbs no longer go in for eerie "penetrating wails" as much as they did, but, as with Firmilian's death over a century ago, Patriarch Irinej's death last Friday is an event of much more than religious significance - which explains the three days of state mourning and telegrams from the likes of Russian President Vladimir Putin.

Irinej, who died aged 90 from COVID-related problems, was a steady and stabilizing influence as head of an organisation than has the power to make plenty of political waves - as the previous government in Montenegro found to its cost when it took on the Church over a new religion law and lost an election.

Ironically, Irinej died just after burying his exact opposite in terms of character on the bishops' bench, Amfolihije Radovic, Metropolitan of Montenegro, a man of extreme options and vaulting political ambitions - who might have created a very different atmosphere in Serbia had he been elected Patriarch in 2010 instead of Irinej.

Amfilohije was a close ally and ardent admirer of the militia leader and racketeer Zeljko Raznatovic "Arkan", the mass executioner of the Muslims of Bjijeljine, among other places in Bosnia, who was shot dead in a Belgrade hotel in 2000.

A man who seemed to regard Catholics and Muslims as infidels with little right to life or property, as Patriarch, Amfilohije might have been a thorn in the side of Aleksandar Vucic's government, which has not been nearly as aggressively nationalistic as many Serbian hard-liners would like.

Irinej was a much more pacific type. No public hugs of killers like Arkan for him.