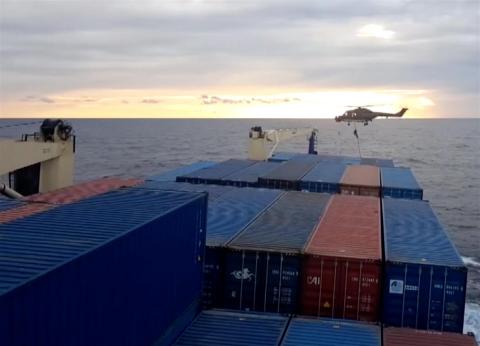 Turkey has protested a German frigate deployed under Operation Irini by the European Union that carried out an "unauthorized" search on a Turkish cargo ship in the eastern Mediterranean, which was carrying humanitarian aid to Libya.

"We regret the detention of our ship, which seems to have not violated the arms embargo, from its route for hours under severe weather conditions, and the fact that the personnel were treated like criminals during the inspection. We protest this act of unauthorized and forceful use. All kinds of compensation rights of the relevant real and legal persons against the damages and losses that may arise from this will naturally be reserved," Foreign Ministry Spokesperson Hami Aksoy said in a written statement.

Operation Irini, carried out by the EU, is an operation whose "purpose and benefit are open to discussion," said the spokesperson.

As part of this operation, a German warship "Hamburg" on Nov. 22 questioned in detail the Turkish flagged merchant ship "MV Roseline A," which was transporting paints and humanitarian aid from Ambarlı Port to Misurata, according to his statement.

The captain cooperated and shared detailed information about the ship's load and voyage, but the armed elements of Operation Irini embarked on the ship and carried out an "inspection" that lasted for hours, Aksoy said, noting that all personnel, including the captain, were searched "forcibly, all personnel were gathered and detained in one place and containers were searched by force, with an armed soldier standing at the captain's head."

"The said intervention was carried out with the consent of neither our country as the flag state nor the ship's captain. Despite the captain's statements regarding the nature of the cargo carried...