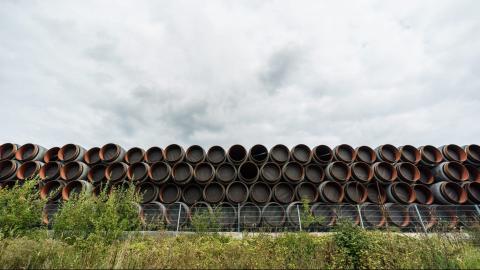 Countries in the Balkan region are still heavily dependent on Russian gas, making them vulnerable to pressure from Moscow, the US ambassador to Skopje, Kate Byrnes, warned during the Macedonian Energy Forum 2020 on Monday.

"In 2014, a study found North Macedonia to be one of the five European countries to be most vulnerable to a shut-off of Russian natural gas, due to its complete dependence on Gazprom. Unfortunately, not much is changed since then, and other countries in the region are still heavily dependent on Russian gas and thus vulnerable to coercion," Byrnes told the forum in Skopje.

The energy cooperation projects that North Macedonia is implementing together with Greece were lauded by both domestic and foreign representatives at the Forum, with both highlighting the importance of such projects in creating a more diversified energy sector in the region.

"The government has expressed its strong commitment to build a gas interconnector with Greece and that is a step in the right direction. We urge both countries to move quickly to overcome any barriers to this deal," Byrnes said.

"North Macedonia's strategic location and connection to Greece via pipeline would open opportunities to transport natural gas to Kosovo, Albania and Serbia, allowing those markets to benefit from low cost natural gas," she added.

In a video address, the US Assistant Secretary of State for Energy Resources, Francis R. Fannon spoke about the importance of the regionalisation of energy markets, suggesting that new energy supplies will create new opportunities for the Balkans.

"We see this happening very meaningfully in the case of North Macedonia and the acceleration of energy partnerships, the interconnector with Greece and Bulgaria is a...

Personality in the News 2020: The Bulgarian Doctors! Violina Marinova, Stefan and Maxim Ivanovi, Katya Kostova and Kubrat Pulev recognized as Ambassadors of Novinite!

Mass Testing and Vaccination of Teachers in Bulgaria Starts within Days