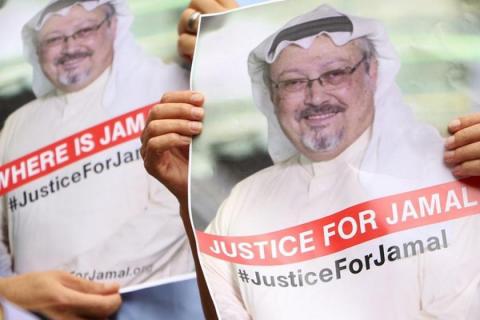 Jamal Khashoggi felt threatened by people close to Crown Prince Mohammed bin Salman before he was assassinated, said a close friend in his testimony to an Istanbul court on Nov. 24.

A second hearing of the trial was held in the Istanbul Chief Public Prosecutor's Office in the absence of 26 Saudi suspects, including two former aides of the powerful Saudi crown prince, involved in the Washington Post columnist's high-profile murder.

The 59-year-old journalist was strangled and dismembered inside the kingdom's Istanbul consulate on Oct. 2, 2018. He went inside to get the documents for his marriage to Turkish fiancée Hatice Cengiz.

Ayman Nour, an Egyptian political dissident and longtime friend of Khashoggi, told the court that the journalist had described to him of being personally threatened by the Saudi media czar.

"I had known Khashoggi for about 30 years. We had worked together with him on a magazine project in London. He told me that he was threatened by al-Qahtani and his family. al-Qahtani is close to the Saudi royal family," Nour said.

Noting that Khashoggi was living in Istanbul since 2015, Nour highlighted a meeting between Khashoggi and Crown Prince Mohammed.

"In 2016, Khashoggi told me that he was going to meet Mohammed. They quarreled about the next year's budget. At the end of the meeting, as Khashoggi told me, Bin Salman asked him, 'You are going to Istanbul so often. Why do you meet Ayman Nour?' Khashoggi did not respond to the question," Nour said.

"When Khashoggi came back to Turkey, he took a photo with me and posted on his social media account with a note, 'Ayman is my old friend.' This was his answer to Mohammed," Nour said, adding that Mohammed knew he did not like him....