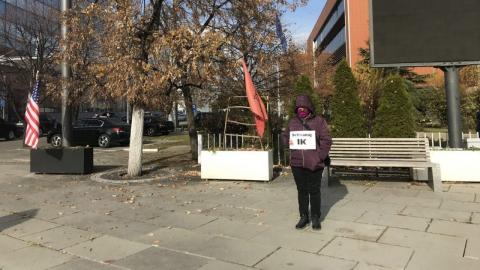 Igballe Rogova, a veteran human rights activist who is the director of the Kosovo Women's Network, staged a symbolic solo protest outside the government building in Pristina on Tuesday, accusing deputy prime minister Driton Selmanaj of showing disrespect to the people who went missing during the Kosovo war.

Selmanaj sparked angry reactions when he accused opposition MPs who questioned him during a parliamentary debate last Thursday about what the government is doing to resolve the missing persons issue of putting "politics over corpses, over the missing, over the bones of people taken from you".

Later that day, he caused further discontent during an interview on TV station T7. When the host suggested that the MP who asked him the question in parliament, Saranda Bogujevci, "cannot be accused for abusing the topic of the missing because she herself is a survivor of a massacre", Selmanaj responded that "we are tired of such stances".

"Selmanaj's statement is very problematic because he offended all the relatives of the missing by telling them publicly that he is tired of these topics," Rogova told BIRN.

Rogova, who was holding a placard with the words "Selmanaj Ik" ("Selmanaj Leave"), vowed to continue her protest every day until he resigns.

She said that she was also offended by Prime Minister Avdullah Hoti's claim that Selmanaj had been misinterpreted.

"I cannot understand why the PM does not meet with the citizens and the families and listen to their grief," Rogova said.

The opposition Vetevendosje (Self-Determination) Movement party has urged Hoti to dismiss Selmanaj, and a petition for his sacking has attracted over 4,200 signatures.

Over 1,600 people, mainly ethnic Albanians but also some Serbs, are still...