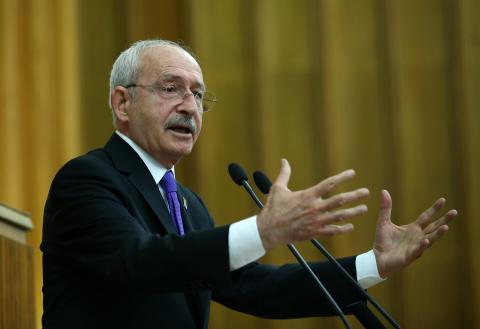 Turkey's main opposition party leader has vowed to resolve the problems of teachers with a five-article package that includes special legislation for the protection of the rights and interests of the instructors on the occasion of Teachers' Day.

"Increasing the status and place of the teachers in society is a political choice of ours. The government has no such intention. We love our teachers and students," Kemal Kılıçdaroğlu, the leader of the Republican People's Party (CHP), told his parliamentary group on Nov 24 as Turkey marked the Teachers' Day.

The teachers in Turkey feel abandoned and ignored because of the ruling Justice and Development Party's (AKP) wrongful education policies, Kılıçdaroğlu said, accusing the government of having used students as experimental objects for the past 18 years in government.

"Do we have an educational government set by the participation of stakeholders? Education can only be national when it is done that way. They changed the minister seven times, all with seven different education policies," Kılıçdaroğlu stated.

The Court of Accounts revealed that Turkey feels the shortage of around 140,000 teachers but the government has never initiated to recruit them although there are tens of thousands of newly graduates waiting to be appointed as teachers, he informed.

Kılıçdaroğlu said the CHP will resolve all of teachers' pending problems in a bid to reinstate their respectful status in the society.

"The teachers will have a special law, separate from the public servants' law. They will be granted with a special and respectful status," he said. "No teacher's salary will be below the poverty line. We want our teachers not to suffer from any economic difficulty," he added.