Man plotted to kill wife who wanted divorce with grenade 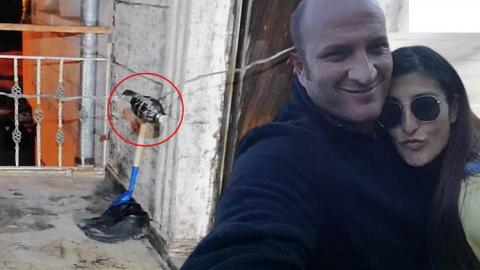 A man has plotted to kill his wife, who wanted a divorce, with a bomb he hung on the door of her family's house in the Ürgüp district of the Central Anatolian province of Nevşehir.

Bayram Çelik, 32, reportedly tried burning her house and the car before and shot bullets at her car in the past.

Hacer Çelik, 26, said even she never expected him to plant a bomb outside her house.

On the night of Nov. 21, Hacer Çelik and her parents woke up to the sound of noises coming from the front door of their house. When they looked out from the window, they saw Bayram Çelik running away and a black object hanging on the door.

Without touching anything, they called the police and security units who determined the grenade would have exploded if someone opened the door.

Bayram Çelik was arrested and jailed on "attempted murder" charges.

"I want justice for myself and my family," said Hacer Çelik.

According to the woman, the couple met two years ago when Bayram Çelik introduced himself as an employer at a rent-a-car business.

They got married in a religious ceremony and started living together. But after their baby was born, she learned that he was actually not working. She wanted a divorce and went back to her family's house.

"First he asked me to give our baby to him. I told him to go to court, like I did," Hacer Çelik told İhlas News Agency.

"Then his assaults started. He did everything. Threats and assaults… He even accused us of drug-dealing. Police came and searched our house and we even gave blood samples. Lately we proved that we do not use or sell drugs," she said.

"He threatened me all the time. I filed a complaint against him, but the prosecutor...