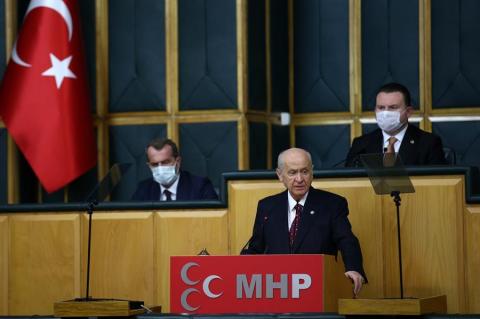 Nationalist Movement Party (MHP) Devlet Bahçeli has embraced the People's Alliance of his party with the ruling Justice and Development Party (AKP) and has vowed to continue this cooperation for making new reforms in Turkey.

"Our relationship with our president is consistent and principled so that the enemies of Turkey cannot comprehend. People's Alliance is Turkey's sole hope," Bahçeli said, speaking at the MHP's parliament group meeting on Nov. 24.

"We follow the ugly rumors being said about the People's Alliance. Many things have been talked about, such as the columns of the People's Alliance were cracking. Some said, 'It is indicating a change of course,'" Bahçeli said, recalling the developments after President Recep Tayyip Erdoğan pledged new reforms in the economy and judiciary in Turkey.

The MHP and the AKP "grasp the two ends of Turkish history," he said. "The People Alliance was not built on the politics of bargaining. Its common denominator is the historical rights of the Turkish nation."

Stating that the biggest reform of the People's Alliance is the presidential system, he said this alliance would continue to move on its way of making new reforms.

Bahçeli once more backed up the convicted gang leader Alaattin Çakıcı, saying that he's a patriot, and has accused the Republican People's Party (CHP) leader Kemal Kılıçdaroğlu of being in cooperation with the "terrorists that he worked to prepare a new constitution."

Bahçeli was recalling the claims that the CHP was in touch with the People's Democratic Party (HDP) to carry out work on forming a new constitution.

Çakıcı, who was released from the prison this summer benefiting from a partial amnesty law after the push by the MHP, harshly criticized...