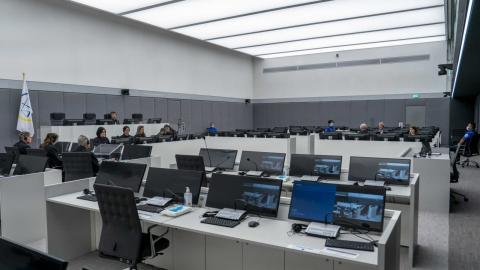 The Kosovo Specialist Prosecutor's Office on Monday urged the pre-trial judge in the case against Hashim Thaci and three other wartime Kosovo Liberation Army guerrillas, all of whom are now senior politicians, that the start of the trial should not be subjected to delays until 2022 as the defence has requested.

Defence lawyers told a status conference in the case at the Kosovo Specialist Chambers in The Hague last week that the four men's trial should not start for at least 18 months to give them enough time to prepare.

But the Specialist Prosecutor's Office argued that the trial should begin next summer or by September 2021 at the latest.

"The SPO [Specialist Prosecutor's Office] has every interest that these proceedings be conducted with transparency and fairness for all parties, such that the result of this trial will stand and will be perceived as fair by all who will objectively consider the issue," the prosecution said in its submission to the pre-trial judge.

"However, the significant delays urged by the defence are neither justified nor consistent with the interest of expeditious proceedings or the rights of the witnesses and victims in this case, as recognised in the law," it added.

The prosecution claimed that the call for a delayed start "is transparently directed towards a primary strategic purpose beyond the legitimate need to prepare for trial".

It said that the goal was to "obtain provisional release" for the four suspects, who have been held in custody since their release due to fears that, as men with significant power and influence in Kosovo, could interfere with witnesses.

The prosecution has already accused some of the defendants of trying to influence potential witnesses even before their...