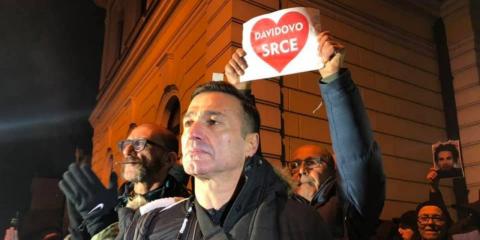 The trial in absentia of Davor Dragicevic began on Tuesday in the Bosnian town of Banja Luka on charges of slandering three senior police officers with comments accusing them of wrongdoing in the investigation into the death of his son David.

They are seeking 4,000 euros each in damages from Dragicevic, whose son's murder has not been solved more than two years after the crime.

The lawsuit, which BIRN has seen, claims that "the defendant in his public appearances on several occasions told untruths with no factual basis" about the three officials.

As evidence, CDs with recordings of Dragicevic's comments that were broadcast by various television stations have been submitted.

Dragicevic has been on the run in Austria since a warrant was issued for his arrest in January 2019 and did not attend the hearing.

He told BIRN by telephone that he was being tried while "my son's killers are still at large".

"I stick to my earlier views. I didn't say anything by accident. For everything I said, I had information, which I also received from the police building. I continue to accuse them all," Dragicevic said.

Republika Srpska police accuse him of being responsible for clashes between police and protesters at 'Justice for David' rallies that were staged to highlight the failure of the police to solve the case.

Dragicevic's lawyer he will ask everyone involved in the case to testify, including the minister and the chief prosecutor.

"Recently, a statement from a...

For Travelers’ Attention: Mandatory Online Registration Required for Arrivals in Austria as of January 15