Vučić presented medals for merits in the fight against COVID-19 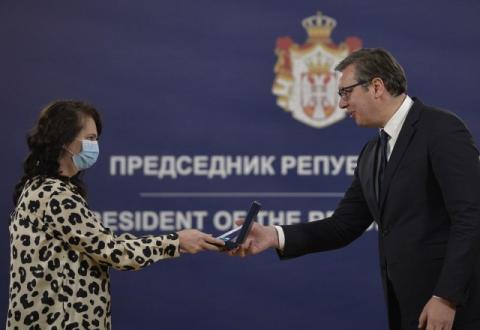 After that, Vui presented the decorations to individuals, in separate ceremonies, in accordance with the introduced epidemiological measures.
The gold medal was awarded to the following institutions: the Blood Transfusion Institute of Serbia, the Institute of Public Health of Serbia "Dr Milan Jovanovic Batut", the Institute of Public Health of Vojvodina, the Institute of Virology, Vaccines and Serums "Torlak", the Institute for Nuclear Energy INEP, and the Institute for Molecular Genetics and Genetic Engineering IMGGI.
Gold medals for merits were also awarded to JKP "Vodovod i kanalizacija" Novi Sad, JKP "Vodovod" Sremska Mitrovica. Silver medals of merit were awarded to the Institute for Biocides and Medical Ecology - Belgrade, JKP "Gradska istoa" - Belgrade, City Institute for Public Health - Belgrade.
Gerontology Center Belgrade, Gerontology Center Novi Sad, Gerontology Center Sabac, Directorate for Execution of Criminal Sanctions, National Organization of Persons with Disabilities of Serbia, Jedi Movement Association - Nis, and Center for Day Care for Children, Youth and Adults with Developmental Disabilities "Mara" - Nis.
Today, Vui presented the decorations to the leaders of those institutions in the Presidency of Serbia.
He told them that the recognitions, although received on behalf of work organizations, and thus not perceived as personal recognitions - represent the best assessment of their work in managerial positions.
"Because you have to show special effort, energy and desire to dedicate yourself to work, to take care of employees and your country. That is why I am infinitely grateful for energy and work in difficult times, when it is always easiest to criticize, you have shown that you know how to fight every day",...