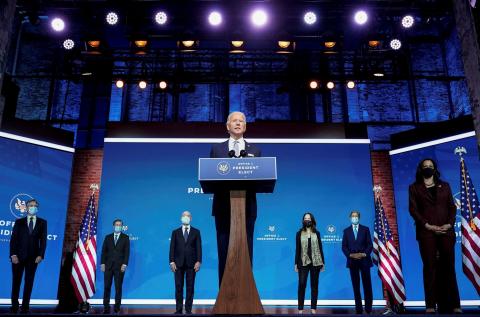 Declaring "America is back," President-elect Joe Biden introduced his national security team, his first substantive offering of how he'll shift from Trump-era "America First" policies by relying on experts from the Democratic establishment to be some of his most important advisers.

"Together, these public servants will restore America globally, its global leadership and its moral leadership," Biden said on Nov. 24 from a theater in his longtime home of Wilmington, Delaware. "It's a team that reflects the fact that America is back, ready to lead the world, not retreat from it."

The nominees are all Washington veterans with ties to the Obama administration, a sign of Biden's effort to resume some form of normalcy after the tumult of President Donald Trump's four years in office. Another sign that Biden will soon be in charge: He scheduled a Thanksgiving address to the nation for Nov. 25 afternoon, planning to focus his remarks on shared sacrifices during the holiday season and expressing confidence that Americans will get through the pandemic together.

There are risks to choosing experienced hands from the previous Democratic administration. Besides Republican attacks, progressives fret that Biden is tapping some officials who were too cautious and incremental the last time they held power.

Still, Biden's nominees were a clear departure from Trump, whose Cabinet has largely consisted of men, almost all of them white. Biden's picks included several women and people of color, some of whom would break barriers if confirmed to their new positions.

On Nov. 24 they stood behind Biden and Vice President-elect Kamala Harris spaced apart and wearing masks to prevent the spread of the coronavirus, a contrast with Trump and many of his top...