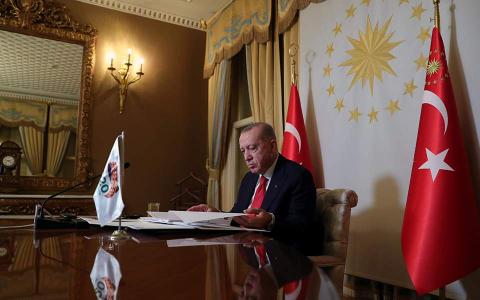 Turkey's President Recep Tayyip Erdogan Wednesday suggested Greece and Cyprus were behind the interception of a Turkish vessel by German soldiers on behalf of a European Union mission off the Libyan coast late Sunday.

"Despite the provocations by Greece and the Greek-Cypriot administration [the Republic of Cyprus] on the eastern Mediterranean issue, we have reacted with patience and restraint," Erdogan told MPs of the ruling party.

"However, despite our patient and restrained attitude, they recently raided our freighter that was transporting cargo to Libya. This was not in line with the international law of the sea. Once again, the captain of the ship that conducted the operation was a Greek national. When they boarded the ship, they harassed the crew," Erdogan said.

Erdogan said that Turkish authorities possess footage of the operation which would...