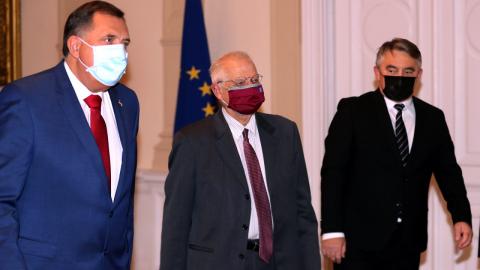 A UN round table on the future of Bosnia and Herzegovina, marking 25 years since the signing of the Dayton Peace Accord, and organised by the Russian ambassador to the United Nations, Vasily Nebenzy, descended into insults and mutual accusations.

The regular accusations exchanged between Valentin Inzko, the Office of the High Representative, OHR - the international body overseeing Bosnia's peace accord - and Milorad Dodik, the Bosnian Serbian chair of the Bosnian Presidency, which have been present in the Bosnian political scene for years, moved on to the international stage.

Inzko accused the Bosnian Serbs of abusing the Dayton Accords and of denying war crimes, especially the 1995 Bosnian Serb massacre in the town of Srebrenica that has been classified as an act of genocide.

"There is also the erection of a monument to convicted war criminal [former Bosnian Serb leader] Radovan Karadzic, denial of the Srebrenica genocide and other similar rhetoric that threatens unity. After 25 years, we have witnessed the abolition of Dayton instruments," Inzko said.

Dodik responded by calling Inzko a monster and a foreigner who serves only the interests of the Bosniaks in Sarajevo, speaks only on their behalf and wishes to destroy Bosnia.

"Stop the monster who is trying to impose decisions on us that were not established in the Dayton Agreement; he is a foreigner who will destroy Bosnia, he is taking revenge on Serbs and Croats," Dodik said.

"We will not officially announce or respect any of his decisions in the RS. If Inzko continues to implement decisions, I will consider beginning the integration of the RS with Serbia," Dodik said, referring to the Republika Srpska, the mainly Serb entity of Bosnia established under the Dayton deal....