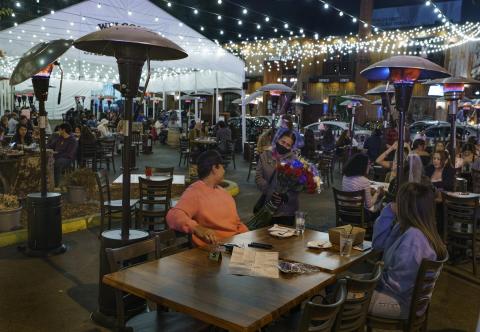 A restaurant dining ban in Los Angeles was due to come into force on Nov. 25 as officials warned Americans to stay at home for the Thanksgiving holiday, while parts of Europe eyed looser lockdowns over the festive season.

"It's as important to say no even when it comes to the closest people in our family," Dr Mark Ghaly said Tuesday, adding he had barred his own mother from his planned celebration.

The U.S. government's health protection agency has for the first time called on Americans not to travel for the annual holiday, which will see families get together Thursday over turkey, yams and cranberry sauce.

With the U.S. confronted by soaring numbers of deaths and new cases, plans to deliver a vaccine to Americans are accelerating.

More than six million doses of the Pfizer-BioNTech Covid-19 vaccine will be available in the first week after it is cleared for emergency use, which is likely next month, according to officials.

General Gustave Perna, chief operations officer for the government's Operation Warp Speed, told reporters some 40 million doses of vaccine would be ready by the end of December.

There were more than 86,000 coronavirus hospitalisations in the U.S. on Tuesday, a record number. Latest figures

showed that the country recorded over 2,000 deaths and 167,000 new cases in the last 24 hours.
"We are on fire with Covid," Kentucky Governor Andy Beshear told CNN, as he advocated for stricter lockdown measures.

As America grappled with its crisis, European nations were slowly relaxing measures ahead of their...