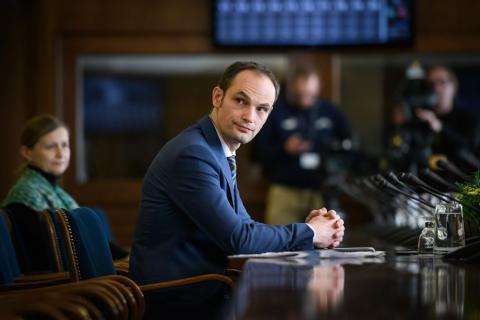 Berlin – Foreign Minister Anže Logar addressed participants of the Berlin Foreign Policy Forum on Tuesday to highlight the priorities of Slovenia’s EU presidency in the second half of next year and stress the importance of solidarity among EU member states, the Foreign Ministry said.

Logar said that solidarity among EU members also meant the search for a comprise acceptable for everybody. EU countries have different starting points but the same goals, he told the meeting organised by the German Foreign Ministry and the Körber-Stiftung foundation.

The forum, focusing on European cooperation, was opened with addresses by the foreign ministers of the EU presiding trio Germany, Portugal and Slovenia; Heiko Maas, August Santos Silva and Logar.

The ministers also spoke about the pandemic, with Maas saying a lot had been learned from the mistakes done in the spring and that the EU had responded fast and with solidarity with the recovery package. He is confident the funding package will be confirmed in the coming days.

According to RTV Slovenia, the moderator of the panel quizzed Logar about the recent letter by PM Janez Janša and his claim that only an independent judicial body could determine what the rule of law meant.

Logar said he saw the letter as a call to not enter a blind alley with a veto on the funding package but instead have a final attempt at coordination to reach consensus in the end.

He argued that traditional democracies had a different view of the rule law compared to countries that emerged from under repressive regimes 30 years ago, that the different perception angles needed to be accepted and that the goals were shared, RTV Slovenija reported.

The moderator mentioned Janša’s premature calling of the US election in Donald Trump’s favour and asked Logar if the Slovenian government had already congratulated president-elect Joe Biden. Logar said the government had not congratulated Biden and that the Trump message had come from PM Janša’s private Twitter account.

Logar also held separate meetings with his German and Portuguese counterparts on the sidelines of the forum.

Logar and Maas stressed efforts to strengthen strategic dialogue between the two countries. Logar expressed the hope for a quick restoration of the scope of economic cooperation with Germany, Slovenia’s most important trade partners, to pre-crisis levels.

The pair welcomed efforts for greater coordination in Covid-19 related measures in the EU and the EU initiative for joint vaccine procurement and distribution.

They also stressed the importance of the agreement on the implementation of the EU budget and the recovery fund, and confirmed constructive cooperation as part of the EU presiding trio.

Logar and Santos Silva also noted the good relations and regular ties between Slovenian and Portugal. Logar welcomed the reopening of the Portuguese Embassy in Ljubljana.

Experience with the handling of the pandemic and views on cooperation as part of the EU presiding trio were exchanged as well, the Foreign Ministry said.