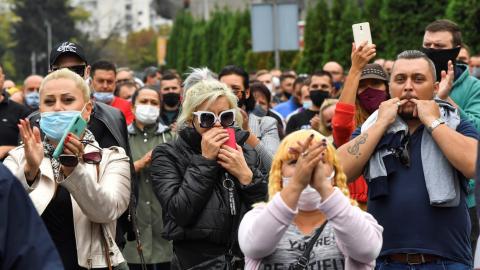 Some of these countries are both importers and exporters of workers. They rely on cheaper workers from Ukraine or the Balkans to fill lower-skilled jobs, often to replace their own citizens who have sought more lucrative jobs in Western Europe - mostly Germany, the United Kingdom or the Netherlands.

Anto Domazet, a professor at the School of Economics and Business at Sarajevo University, says that foreign workers in the EU have been hardest hit by the pandemic, since they were usually the first ones to lose their jobs or have their salaries cut. This, in turn, is affecting living standards across Southeast Europe.

While all the countries in the region face similar restrictions on labour mobility, most governments still don't know the scale of the problem, because of the oscillations in the intensity of the coronavirus pandemic over recent months, the constant changes to the security and travel situation, as well as the usual delays in compiling statistical data.

And it is even more difficult to predict how this situation will develop over the coming months, experts and officials say. "Things are changing by the day and it is impossible right now to figure out what will happen," an official from Romania's Labour Ministry told BIRN, speaking on condition of anonymity.

So far, the coronavirus pandemic has had the least impact on those countries that were better developed and/or less dependent on a foreign labour force, such as the Czech Republic or Hungary. Yet even that could change if the pandemic...