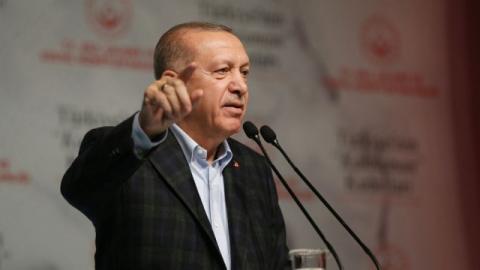 Turkish President Recep Erdogan said he had discussed with his Russian counterpart Vladimir Putin the possibility of involving other countries in efforts to maintain the truce in the belligerent Nagorny Karabakh, Reuters reported.

Azerbaijan and Armenia signed an agreement brokered by Russia on November 10 that ended six-week clashes in the mountain enclave, which is an internationally recognized part of Azerbaijan but populated mostly by Armenians.

Under the signed truce agreement, Russian peacekeepers are stationed in the Karabakh province. Turkey has no peacekeepers, but agreed with Russia a joint monitoring center for the truce, and the Turkish parliament has passed a law to send military observers there.

"We have the opportunity to develop and expand this. We discussed with Mr. Putin the work towards expanding and developing (the ceasefire regime) together with other countries in the region," Erdogan said, without specifying which countries he meant./Reuters

Head of National Operational Headquarters: Restaurants and Bars as Hotbeds of Infection

Bulgaria Live: Only Three Regions Are in the Red Zone on the Morbidity Map

India Calls for Reformed Multilateralism at the UN

Bulgaria Again Ranks Among Most Corrupt Countries in Europe