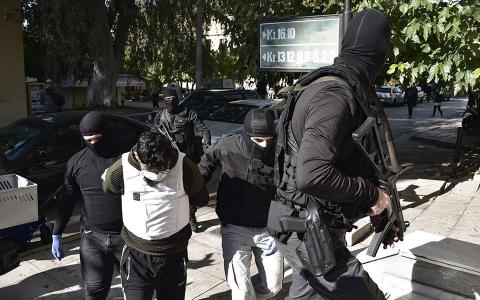 The 27-year-old Syrian national arrested at a migrant camp in Athens last week, who was remanded in custody on Tuesday by an Athens prosecutor, recanted an earlier confession in which he admitted to being a member of the ISIS terrorist group and appearing in a 2014 video of the group.

In his testimony on Tuesday, the unnamed suspect reportedly claimed he had been forced into making his confession through the "use of torture."

The 27-year-old, who arrived in Greece in 2018, is accused of membership in a criminal organization and of participating in murder. He was arrested at the Eleonas migrant camp in Athens last week.

More light is expected to be shed on the case by the forensics examination of cell phones and other electronic devices that were confiscated during the police raid of the container home he shared with his wife and four children at the camp.

Parly in Athens for signing of Rafale deal

Deterrence only way to deal with Turkey, ex-PM says