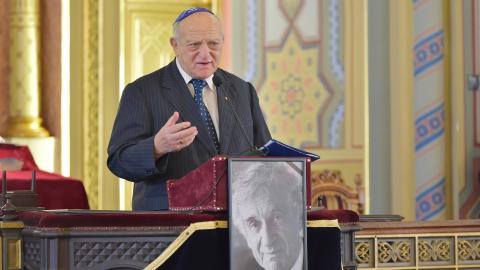 This doctor of economy who a year after the fall of communism became vice president of Romania's Chamber of Commerce started representing his community in 2004, when he was elected to parliament as one of the 17 MPs representing the country's national minorities. A year later he was also chosen as head of the FCER.

Both in parliament and as leader of Romania's Jewish community, Vainer has made himself respected as an unconditional seeker of human understanding beyond ideological and cultural boundaries.

He also has presided over the restoration, with the help of international Jewish organisations and the Romanian state, of some of the architectural jewels of the community's vast heritage in Romania, where a community comprising 800,000 souls before the Holocaust hardly numbers 5,000 people today.

On one of his last days in office, BIRN interviewed him at the headquarters of the FCER, in the stunningly renovated Choral Temple in Bucharest's Jewish Quarter. He told us about his life in pro-Nazi and Communist Romania, his frustrated dream to set off for Israel and the values and worldview that have guided his action.

German ambassador in Romania, Cord Meier-Klodt (L), meets with the president of the Romanian Jewish Comunities Federation (FCER), Aurel Vainer (R), while attending a commemoration event dedicated for the WWII Holocaust victims, held in front of a monument dedicated to those killed or who suffered during the pogrom in Bucharest in January 1941, near the Great Synagogue, in Bucharest, Romania, 27 January 2017. Archive photo: EPA/ROBERT GHEMENT

"I've promoted understanding and inter-human relations … and not put up barriers or immediately raised criticisms," Vainer says of his work. He prides himself on his...