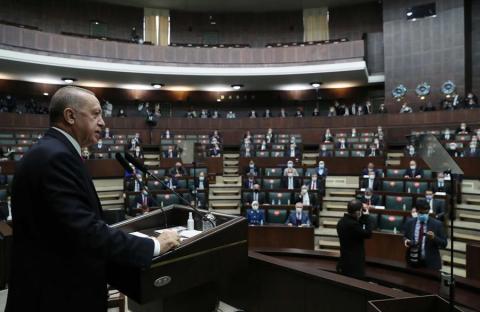 The economic and judicial reforms to improve the investment climate in Turkey will be led by the People's Alliance, composed of the ruling Justice and Development Party (AKP) and the Nationalist Movement Party (MHP), President Recep Tayyip Erdoğan has said, informing that necessary legislation would soon be brought to the agenda in the parliament.

"The People's Alliance is the example of political solidarity with the largest ground. We will realize the economic and judicial reforms as the People's Alliance. As [MHP leader Devlet] Bahçeli has indicated, this alliance is not based on overt or covert negotiations," Erdoğan told his parliamentary group on Nov. 25.

Extraordinary efforts are required in extraordinary processes, and the COVID-19 pandemic has introduced new challenges in the economy, Erdoğan said, reiterating that the government is determined to tackle all these problems.

"We are launching a new mobilization in the fields of investment, production and employment. We will realize comprehensive reforms one by one following the end of the budget talks. We are also accelerating judicial reforms directly linked with the investment climate," he stated.

Erdoğan recalled that the parliament had approved three separate judicial reform packages in recent years, promising that more would follow them, including the Human Rights Action Plan. The government will consult its preparations concerning the reforms with the relevant parties, he said.

Erdoğan did also indirectly mention the resignation of senior AKP official Bülent Arınç, who resigned from his job at the Presidency's Supreme Advisory Board after suggesting that former Peoples' Democratic Party (HDP) Co-Chair Selahattin...