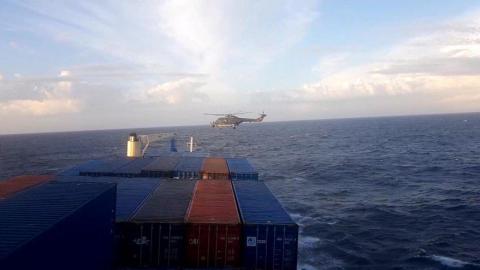 Turkey's top diplomat on Nov. 24 accused a German frigate of violating international law when it stopped and searched a commercial vessel without the consent of its flag-state or its captain.

"It is a violation of international law to embark on trade ships like pirates," Foreign Minister Mevlüt Çavuşoğlu told reporters in the capital Ankara.

Çavuşoğlu underlined that both Turkey's Foreign Ministry and its Embassy in Rome, where the headquarters of Operation Irini under which the German frigate Hamburg was operating is located, had made the necessary warnings that against the boarding action that it could not be lawfully carried out without the permission of the flag state.

He added that they negotiated on the issue with the U.N., NATO and the International Maritime Organization.

"We'll follow the political and judicial process of the issue. We won't let go of this incident," he said.

Çavuşoğlu went on to say that Ankara would do whatever is necessary: "Our president's instructions are in this direction as well. We cannot leave anything done to us unanswered."

"We will not only respond on the field, but follow the judicial and politic processes, as well," he added.

Turkey has long stated that the arms embargo on the war-torn North African country was being enforced in a manner biased to warlord Khalifa Haftar.

The Turkish ship was only carrying such materials as food and paint to Libya's port of Misrata, and did not violate the UN arms embargo, said the Foreign Ministry.