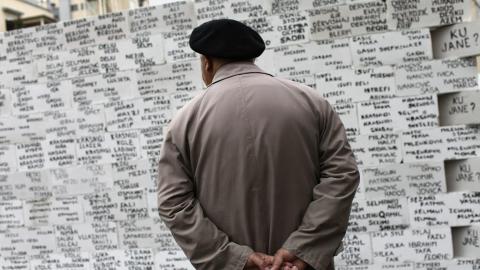 "The voices of the victims are indispensable to justice."

These were the words of the president of the Kosovo Specialist Chambers, Ekaterina Trendafilova, when she called on victims of crimes allegedly committed by four former Kosovo Liberation Army guerrillas who have since become senior politicians to participate in their war crimes case at the Hague-based court.

Her call came as the indictment was confirmed charging Kosovo's recently-resigned President Hashim Thaci, the former leader of the Democratic Party of Kosovo, Kadri Veseli, the former head of the Vetevendosje Movement opposition party's MPs in parliament, Rexhep Selimi, and the national council chairman of the Social Democratic Initiative (NISMA) party, Jakup Krasniqi, with a series of war crimes and crimes against humanity. They have all since pleaded not guilty.

Victims of their alleged crimes "may now apply to participate in the proceedings if they can demonstrate that they personally suffered harm, including physical, mental or material harm, as a direct result of alleged crimes contained in the confirmed indictment", the Kosovo Specialist Chambers said in a statement earlier this month.

According to the indictment, there are at least 416 known victims of the crimes of which Thaci and the others have been accused.

Victims or relatives of victims who apply to participate, and whose application is approved by a judge, will get the opportunity to learn more details about the crime against them or their relatives, receive official acknowledgement of their victim status from the court, and if the defendants are convicted, get the right to reparations.

"Taking part in the proceedings as a participating victim may enable victims to contribute to uncovering the...