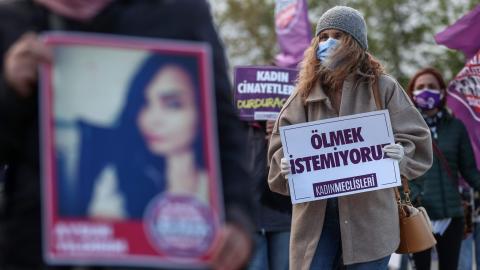 Women protesters wearing face masks as they hold placards reading: 'We don't want to die' at a rally for the 'prevention of violence against women' in Istanbul, Turkey, November 22. Photo: EPA-EFE/SEDAT SUNA

According to police and unofficial data, hundreds of women were killed in the region by men in 2020, while an important number of complaints to police that year were made by women about violence they had endured from partners, fathers and even sons.

Violence against women and femicide in the region is by far the worst in Turkey, where men killed 353 women in 2020 up to now; another 151 women were killed by unknown perpetrators.

The numbers of killings of women in the country were 418 in 2019 and 404 in 2018. According to the Interior Ministry, more than half a million women have sought police protection from male violence in the last seven years.

The number of complaints and protection requests also rose by 70 per cent during the pandemic in 2020 compared to 2019, reaching 256,000 so far.

The same upward trend is reported in most other countries in the region. In Croatia, "based on available statistics, it can be unequivocally concluded that there has been an increase in domestic violence and violence against women since the outbreak of the COVID-19 disease," the country's Ombudsperson's office said.

The latest annual report by the Croatian Ombudsperson for Gender Equality said that of 13 women killed in 2019, ten were killed by a close male person - a partner or family members - while seven of the 10 male killers were either husbands or extramarital partners of the victims.

Marking National Day for the Elimination of Violence against Women on September 22, the Croatian Interior Ministry reported that, in 2020 so far, ...