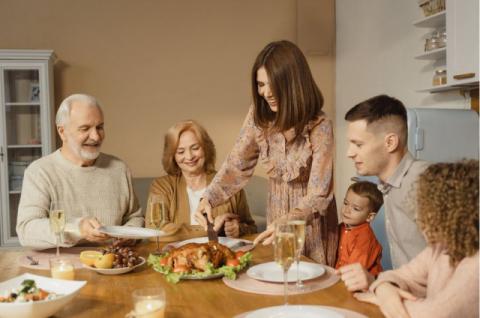 Americans awoke on Thursday to celebrate a Thanksgiving Day transformed by the coronavirus pandemic, with the traditional Macy's parade limited to a television-only event and many families resigned to meeting on video for turkey dinner.

Thanksgiving, normally a day for family and friends to gather in large numbers to feast and remember life's blessings, has been upended by the pandemic, with infections and deaths surging in recent weeks as cooler temperatures push people indoors where the virus spreads more easily.

The Macy's Thanksgiving Day Parade in New York, a spectacle of giant character balloons that has delighted children for nearly a century, has been scaled back significantly. The route is a block long, rather than 2.5 miles; balloon handlers have been replaced by specially rigged vehicles; and spectators will not be allowed to line the streets as before.

The event kicked off on Thursday morning with a series of musical performances and balloons, including a four-story-tall one of the lead dog from the cartoon series PAW Patrol -- all without the usual millions on hand to watch from the street.

The rainy weather did not deter Moriah Hargrave, a native of Lafayette, Louisiana, who had come as close as she could to the action near Macy's flagship store in midtown Manhattan with the hopes of stealing a glimpse of country music star Dolly Parton, who is among the artists slated to perform.

"We came to just knock out a few things on our bucket list for New York City," said Hargrave, 36. "It's a little sad to be this far away. But it's fun to be here and I'm glad it's not too cold."

U.S. hospitalizations for COVID-19 reached a record of more than 89,000 on Wednesday, and experts warn that Thanksgiving could significantly...