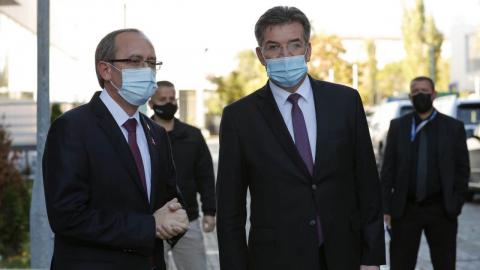 "I have received a letter from Lajcak; I will respond, and any request for a visit will be treated in the context of the sensitivity we encounter," Hoti told the media.

In his letter, Lajcak said he considered the veto a violation of the Freedom of Movement Agreement and the Official Visits Agreement, according to Kosovo's public broadcaster, RTK.

"As defined in the Agreement on Freedom of Movement, individuals of each party are able to travel freely in the territory of the other," Lajcak reportedly wrote, emphasizing the importance of these agreements in the EU-led Kosovo-Serbia dialogue.

"Non-compliance with these agreements sends a very negative signal to Kosovo's credibility as a party to the Dialogue process," he added.

On November 21, in an interview for Albanian media outlet ABC, Kosovo Foreign Minister Meliza Haradinaj Stublla said that "as long as Serbian President Aleksandar Vucic continues with the language of hate and violence, he will not be allowed to enter Kosovo".

In an official press release, Haradinaj Stublla said that the requests of Vucic, Vulin and Petkovic to visit Kosovo following the discovery of a mass grave of Kosovo Albanians in Raska, in southern Serbia, were "an insult".

Haradinaj Stublla further noted that requests by Kosovo officials to visit mass graves "where the bodies of Albanians killed by Serbian forces during the last war in...