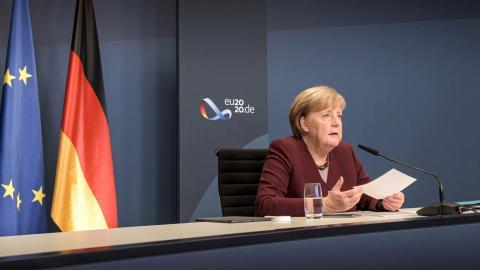 The news is not all bad. Owing to farsighted policy decisions by EU leaders, north-south relations within the Union are on a firmer footing than they have been for many years. One sign of this is that the spreads between German and Italian interest rates are at a record low, indicating that Italy's position in the euro is now rock solid. "Spread anxiety" about the sustainability of the euro has abated across the entire southern tier of the eurozone.

Forget the political hurdles recently introduced by Central European member states with their threats to veto the EU's budget and new COVID-19 recovery fund. Sustaining the long-awaited north-south political and economic convergence will be the EU's top priority in the weeks and months ahead.

While the narrowing of interest-rate spreads initially reflected the European Central Bank's quantitative-easing (QE) policies, it is the EU's new recovery fund - dubbed Next Generation EU - that brought them to record lows. Investors have stopped selling the bonds of indebted southern countries because they realized that northern politicians, particularly in Germany, are willing to provide the support necessary (be it grants or loans) to prevent an unraveling of the euro.

Following the announcement of Next Generation EU came still more good news. In October, the European Commission's first issuance of corona bonds with which to finance the program was vastly over-subscribed. Investors placed bids for more than €233 billion ($276 billion), far exceeding the initial €17 billion on offer. This market reaction sent an unambiguous signal that a fully funded €750 billion recovery program would soon be a reality.

Despite the over-subscription, Hungary and Poland have put the fund's future in doubt by...