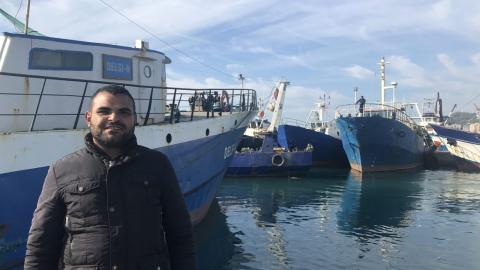 Ebif is not alone. More than hundred other foreigners like him have found work on the country's small fishing fleet, whose owners say local youngsters are unwilling to engage in the profession.

Mostly from Egypt and Turkey, they tend to replace the local fishermen when they retire.

"I gave some of my relatives from Permet work in the four fishing boats I own, but none of them stayed long," Ilir Kapllani, a businessman, from Permet, in the south of Albania, told BIRN.

Scores of Albanians have left that region for other parts within and outside the country - but evidently not for work in fishing.

Kapllani said he had employed 10 to 12 Egyptians on his boats, replacing Albanians who retired over the last few years. He is happy with their work.

"They know how to do everything that is needed on the sea, from maintaining the boats to repairing the nets," he explained.

The Egyptians are mostly from the Alexandria area on the south side of the Mediterranean, an area with a strong seafaring tradition.

Hasan Ebif comes from the town Kafr El Sheikh and told BIRN that his father was also a fisherman, as are his friends living in Durres.

Two years ago, his 18-year-old son, Mohammed, joined him and is currently working on another boat. "Mohammed is waiting to receive his working permit in Albania," he said.

Fishing is a difficult profession. Those willing to join the trade have to get used to spending days away at sea, away from their families, on physically demanding duties.

But Hasan Ebif says there are compensations. "At sea, we become one family," the 37-year-old insists. "Four or five at any...

Meeting of ForMins of EU MS to take place in Brussels