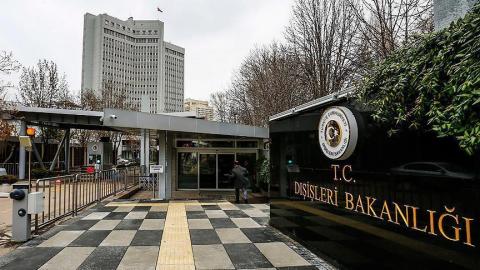 The French Senate's vote to urge its government to recognize Nagorno-Karabakh as an independent republic disregards international law, Turkey said on Nov. 26, noting that Ankara rejects the resolution.

"The resolution adopted yesterday by the French Senate on the Nagorno-Karabakh conflict is an example of the most fundamental principles of international law, legitimacy, and fairness being disregarded for the sake of domestic policy considerations. We completely reject the unfounded allegations raised about Turkey in the resolution," according to a statement by the Foreign Ministry.

This decision of the French Senate is also a clear indicator of why the Organization for Security and Co-operation in Europe (OSCE) Minsk Group work, carried out by the co-chairs, who should be impartial, have not been able to resolve the issue so far, the ministry said.

"The French Senate's call for Azerbaijan to withdraw from its territories, which it had liberated from the occupation, is a manifestation of a ridiculous, biased and unrealistic understanding," it stated.

It emphasized that this decision "devoid of common sense, which cannot be explained by any reasonable justification," also limits the ability of France to contribute in real terms to the solution of the issue.

The decision in which the French government will find "unacceptable elements that reflect obsession against Turkey, which has been seen frequently in France recently, is thought-provoking if not surprising," according to the statement.

The ministry has called on France to avoid "extremely erroneous references to history or irrelevant topics," noting that it is a fundamental requirement to maintain secure relationships between the two countries.