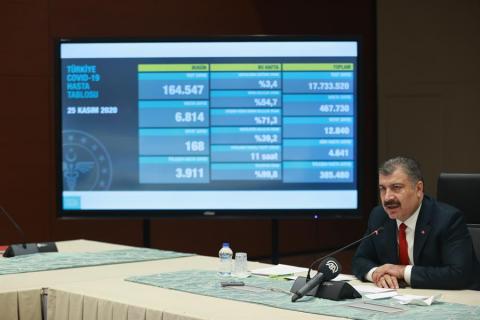 The number of daily reported COVID-19 infections in Turkey jumped to above 28,000 on Nov. 25 after, in a surprise development, the government resumed publishing all positive cases and not just the number of patients being treated for symptoms of the coronavirus.

The government was under the pressure of not revealing the full extent of the virus spread in Turkey, after it was revealed that the number of asymptomatic cases was not being included in data published since July 29.

In a news conference following a weekly scientific advisory council meeting, Health Minister Fahrettin Koca announced 28,351 new infections in the past 24 hours, emphasizing that the data represented "all people whose PCR tests are positive whether they display symptoms or not."

Turkey had previously been reporting around 6,000 daily "patients."

Meanwhile, Koca said Turkey has reached an agreement to receive 50 million doses of the vaccine developed by Chinese pharmaceutical company SinoVac in December, January and February.

Earlier, President Recep Tayyip Erdoğan said a Turkish-developed vaccine could be ready for use by April, adding that his country planned to share the vaccine with other countries.

Erdoğan said Turkey has repeatedly urged countries "not to sacrifice the vaccine to political and commercial ambitions" and to make it "the joint property of all humanity."

He added: "We are planning to put the vaccine that we are developing in the service of all humanity under the best conditions possible." He did not elaborate.

The vaccine, ERUCOV-VAC, is being developed by Erciyes University, in the central Turkish province of Kayseri and is currently undergoing phase 1 of testing.