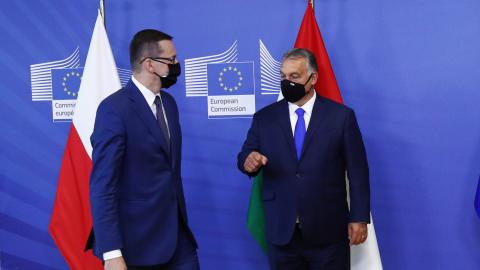 Experts question, however, whether this is not just another propaganda stunt by Hungary's government.

The genesis of the V4 Institute of Comparative Law was a visit by Hungarian Justice Minister Judit Varga to see her Polish colleague, Zbigniew Ziobro, in Warsaw during the summer. By then, it had become apparent to both nationalist-populist governments that European institutions - especially the European Parliament - were preparing to insist on linking future financial transfers to some kind of rule-of-law conditionality. It was time, the two justice ministers agreed, to prep for a long struggle.

On July 20, Varga announced in a Facebook post that the Hungarian government would establish a V4 Institute of Comparative Law to provide professional support over international law issues for parliaments and governments of the Czech Republic, Hungary, Poland and Slovakia.

She also proposed to create a V4 Network of Professors - a kind of Central European professional community which would represent the region's specific points of view in the areas of European law, state development and European integration.

"It was clear from the beginning that the Hungarian government will not shy away...