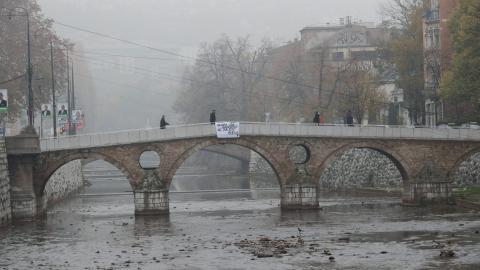 While there have been plenty of well-thought-out elaborations about what a new constitution for Bosnia and Herzegovina might look like, the major stumbling block remains the lack of political will for change.

Incentivising reform has become excruciating, especially as Bosnia's prospects for joining the EU have waned. Examples from the past, like the reforms adopted to ensure Bosnian citizens could enjoy visa-free travel to the EU, hardly apply to the present.

The political elite's capture of the system makes them largely immune to changes at the ballot box, and unwilling to undermine a structure that serves their own ends. Corruption, patronage, and clientalism remain the scourge of Bosnia and Herzegovina.

Whilst some advocate exploiting Bosnia's dependence on international financial instruments to drive through reforms, there are profound concerns about the possible risks of social upheaval. Mention of sanctions is met with similar scepticism in Brussels.

Many hope that a new US administration under Joe Biden, whose long and principled engagement with the region is well-documented, will drive forward a new and more substantive process. It remains to be seen what leverage the US can bring to bear following the Trump administration's haphazard approach to the region in recent years.

In the absence of clear incentives for change at the political level, it is up to domestic coalitions of reformers to generate ideas and mobilise actors in pursuit of reform. While the optimism of the 2014 protests and their resulting plenums quickly dissipated, the recent local elections demonstrated that...