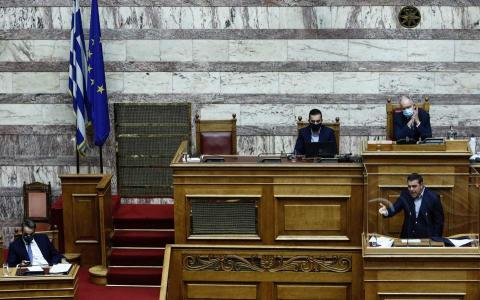 During another of the usual verbal battles in Parliament on Wednesday, between Prime Minister Kyriakos Mitsotakis and opposition leader Alexis Tsipras, the latter referred to a familiar anecdote about the newly elected premier who finds three letters from his predecessor on his desk. He opens the first at the first bump in his tenure; it reads, "Blame the previous government." At the next sign of trouble, the second letter advises, "Blame it on your ministers." And the third says, "Prepare three letters."

Tsipras argued that the prime minister is in phase one of blaming his predecessors and will soon start blame his ministers and reshuffle the cabinet. "I don't know how soon you'll get to phase three," he added.

"I did not find three letters, Mr Tsipras. I didn't even find a router on my desk," the prime minister quipped in response.

This exchange brought to...

New arrangement for arrears to the state

Contraction up to 15% in first quarter

Dozens of buildings get new lease on life in Greek capital

ATHEX: Banks lead index back up to 800 pts