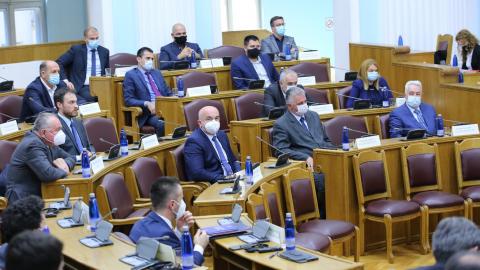 On Thursday, media published that the leader of the liberal Black-on-White coalition, Dritan Abazovic, had proposed an agreement asking the future government to pass a Law of on the Examination of the Origin of Property and a Law on Lustration.

"The government should make amendments to all discriminatory laws, with the priority of enacting them as soon as possible. It also applies to the Freedom of Religion Law with an emphasis on the abolition of disputed articles," it was said in the proposal.

In parliamentary elections held on August 30, the three opposition blocs won a slender majority of 41 of the 81 seats in parliament, ousting the long-ruling Democratic Party of Socialists, DPS.

The pro-Serbian For the Future of Montenegro coalition won 27 seats, Peace is Our Nation won ten and Black-on-White won four seats.

Abolition of the religion law passed by the outgoing government is a key demand of the For the Future of Montenegro alliance, whose leader, Zdravko Krivokapic, has been proposed as the new prime minister.

Since the last parliament passed the law in December 2019, tens of thousands of Serbian Orthodox Church priests, believers, and supporters have been protesting in public, demanding its withdrawal. The Serbian Church - whose relations with the outgoing government were already poor - claims the law would allow the state to confiscate its property.

According to the agreement proposal, the new government should also review all concession agreements and adopt a declaration banning the construction of new small hydropower plants on Montenegrin watercourses. It should also start election reforms and intensify the...