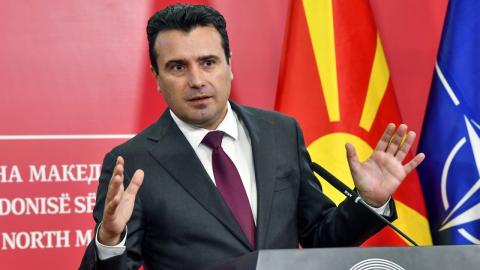 An interview that North Macedonia's Prime Minister Zoran Zaev gave Bulgarian news agency BGNES, published on Wedensday - in which he suggested that Bulgaria had not been occupying force in today's North Macedonia during World War II, has hit raw nerve in his own country.

His remarks have drawn criticism from historians, public figures, as well as politicians, even from his own ruling Social Democratic Party, accusing him of historical revisionism. The opposition called for protests.

He was condemned by a member of the Macedonian team in the joint North Macedonia-Bulgaria history commission, Ljubica Spaskovska.

"As member of the Macedonian part of the commission, I personally distance myself and condemn the latest remarks of the PM," she said, adding: "I appeal to politicians to withhold themselves from claims and comments on subjects with which they are not acquainted, and are not in their domain," Spaskovska wrote on Facebook on Wednesday.

She was soon joined by her colleague on the same commission, Ognen Vangelov, who also distanced himself from the PM's statements.

In the interview, Zaev talked about his country's efforts to persuade Bulgaria to lift its blockade on the start of North Macedonia's EU membership talks.

Turning to contentious historical isurs, he said that "Bulgaria is not a fascist country. Bulgaria is our friend. The new generations don't know the entirety of this reality that must unite us," adding that former Yugoslavia, of which Macedonia had been part, had kept Macedonians and Bulgarians from being closer.

He later said that his government had removed some plaques on historical wartime monuments that contained the words "Bulgarian fascist occupation," which Bulgaria deems highly offensive.

Personality in the News 2020: The Bulgarian Doctors! Violina Marinova, Stefan and Maxim Ivanovi, Katya Kostova and Kubrat Pulev recognized as Ambassadors of Novinite!

Mass Testing and Vaccination of Teachers in Bulgaria Starts within Days