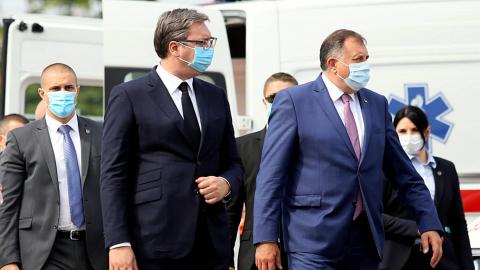 Visiting Montenegro this month for the funeral of a senior Serbian Orthodox bishop, Serbian President Aleksandar Vucic stopped by the 'Serbian House' in Podgorica, founded in 2017 and opened in 2019 to promote Serbian science and culture in a country where 30 per cent of people identify as Serb.

The Serbian state under Vucic has invested some four million euros in the initiative since 2017, including the purchase of its premises in the capital.

"Even when they attack us for investing too much money, we will invest even more," Vucic said during the visit on November 1. "I am happy that this is a gift from the Republic of Serbia to the Serbian people in Montenegro, and there will be more - on the coast and in the north of Montenegro."

Indeed, the money granted to Serbian House represents only a small slice of the funds flowing from the Serbian budget to Serbs in former Yugoslav republics - at least 33.8 million euros over the past four years, probably more given that official data for the past two years has still to be published in full.

More than half of this amount went to Bosnia and Herzegovina and its mainly Serb-populated Republika Srpska, one of the country's two entities. Next in line were Montenegro, Croatia, North Macedonia and Slovenia.

Analysts say it is no coincidence that Serbs in Bosnia and Montenegro are the biggest beneficiaries of the Serbian largesse.

"Serbia has significant influence over representatives of the Serbs in Bosnia and Herzegovina and Montenegro, and if we start with territorial changes in the region on the principle of ethnicity, the potential for the creation of a Greater Serbia is seen in these two countries," said Aleksandar Popov, director of the Centre for Regionalism, an NGO based in the...