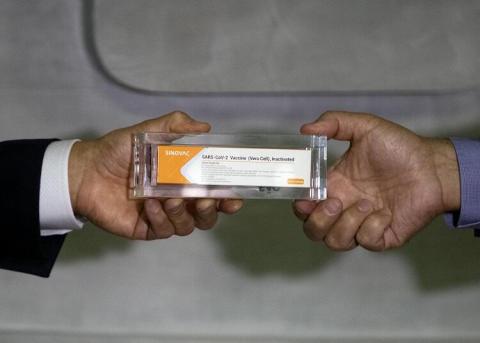 Turkey has signed a contract to buy 50 million doses of the COVID-19 vaccine from China's Sinovac Biotech, Health Minister Fahrettin Koca has said.

Turkey has a deal for 50 million doses of China's Sinovac vaccine that will be delivered in December, January, and February, according to the minister.

"If all goes well, we plan to start vaccinating at-risk groups gradually, starting with our healthcare personnel," he said, adding that people will be vaccinated for free.

Speaking in Ankara after the Health Ministry's Science Board meeting on Nov. 25, Koca reiterated that Turkey is also in talks with other vaccine developers, including Russia.

"The important thing here for us to start using vaccines which are known to be effective and reliable ... I think the vaccination calendar could start on Dec. 11," he said.

The minister earlier this month unveiled that Ankara was hoping to buy doses of Pfizer and BioNTech's vaccine.

If the Pfizer and BioNTech vaccine obtains its license, Turkey may get one million doses of the vaccine by the end of the year. We are in talks to gradually go up to 25 million within a year starting from January, Koca said at that time.

At the press meeting on Nov. 25, the minister reminded that Turkey is carrying out studies to develop its own vaccines.

Works are underway for 16 potential vaccines and one of those candidate jabs has already been administered to 44 volunteers, Koca noted.

"No serious side effects have...