Turkey must demonstrate its commitment to international law, FM says 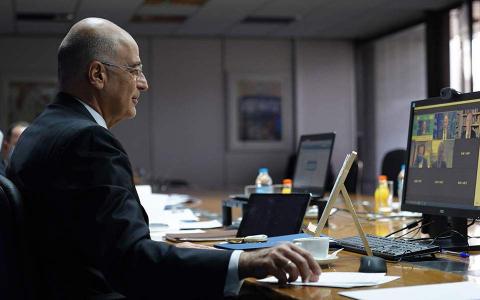 Greece is ready to engage in talks with Turkey as long as Turkey proves its commitment to international law, Foreign Minister Nikos Dendias said Thursday, warning Ankara against a diplomatically-expedient, short-term readjustment of its foreign policy in view of the upcoming European Council on December 10-11.

Dendias made the comments after briefing opposition parties on the recent defense and foreign policy cooperation agreement and the Joint Declaration of Strategic Partnership signed between Greece and the United Arab Emirates (UAE).

During a briefing of diplomatic correspondents earlier Thursday, Foreign Ministry spokesperson Alexandros Papaioannou said that EU governments ought to adopt a united stand toward Turkey's destabilizing role in the wider region.

He said that last month's European Council, which stopped short of imposing sanctions on...