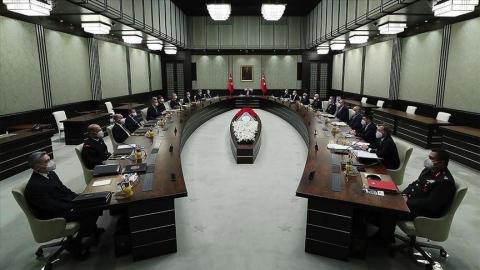 Ankara will take necessary steps in every field against the EU's Operation Irini over the illegal search of a Turkish-flagged vessel bound for Libya, Turkey's National Security Council said on Nov. 25.

The council strongly condemned the unlawful search of the ship this past Sunday by a German frigate part of Operation Irini, which has the purported aim of enforcing a U.N. arms embargo against Libya.

A statement issued after a meeting of the National Security Council said the unilateral act was completely against international law and principles of alliance relations.

Vowing to take "necessary steps in every field", the Turkish body said the purpose and legitimacy of the EU operation was dubious as it had been turned into a complete embargo on the legitimate Libyan government.

The Turkish-flagged ship was taking paint, paint materials, and humanitarian aid to Libya, and the EU operation has since admitted that the unlawful search did not lead to recovery of any illegal items.

Turkey has long maintained that the UN arms embargo on Libya is being enforced in a biased manner favoring warlord Khalifa Haftar.

The insistence of some parties on denying the existence of two communities and two states on the island of Cyprus is unacceptable, said the statement issued by the National Security Council.

The council asserted that Turkey will continue to protect the legitimate rights of Turkish Cypriots, saying that tensions were rising in the region because some parties were steering away from dialogue and cooperation.

Turkey has consistently opposed Greece's efforts to declare an exclusive economic zone based on small islands near Turkish shores, violating the interests of...