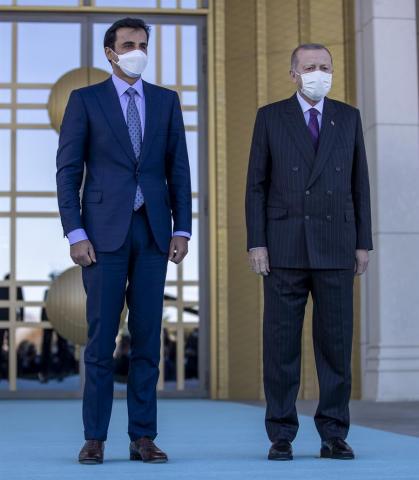 Al Thani arrived in Ankara to attend the sixth meeting of the Turkey-Qatar Supreme Strategic Committee.

He was welcomed by a ceremony at the presidential complex, and the two leaders met one-to-one following the event.

Later, Erdoğan and Al Thani held an inter-delegation meeting with a signatory ceremony in various fields.

Ankara and Doha enjoy strong relations, particularly since the 2017 blockade of the Gulf country by Saudi Arabia and others.

The two countries have strengthened military and economic ties in recent years.

Meanwhile, Erdoğan warned against "digital fascism" and said unless a proper infrastructure and fair understanding is provided, the digital world could lead to "modern-day slavery."

"Digitalization, which sees the individual merely as a name or number, leads to fascism. We must fight against digital fascism altogether," Erdoğan said on Nov.26, speaking at the fourth International Women and Justice Summit via teleconference.

The biggest weakness of digitalization is that data control becomes monopolized, he emphasized. This "distorted" situation, in which a small number of companies control the digital...