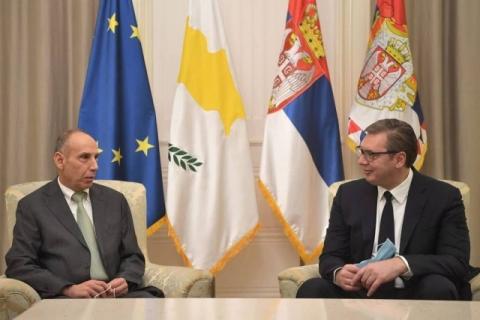 Vui thanked him for his diplomatic work and his contribution to strengthening the relations between the two countries, stating that Cyprus is a sincere friend of Serbia.
Vui reminded that during the mandate of Ambassador Eliadis, President of Cyprus Nikos Anastasiades visited our country and that a session of the High Council for Cooperation between Serbia and Cyprus was held.
He also expressed hope that the circumstances will soon allow a new session of that Council to be held, as an opportunity to enrich Serbian-Cypriot cooperation, Media Relations Office of the President announced.
Vui emphasized that Cyprus is a sincere friend, who firmly defends international law, thanking Cyprus for the support of the territorial integrity of Serbia, while Serbia supports the territorial integrity of Cyprus in the same way.
He also thanked for the support that the country provides to our EU-related path.
Ambassador Eliades informed President Vui about the developments around the Cyprus issue and the challenges the eastern Mediterranean face.
The two interlocutors agreed that Serbia and Cyprus are committed to reaching a solution while respecting international law, and that both countries want to contribute to peace and stability in the world and economic progress by acting on the international political scene.
Ambassador Eliades thanked Serbia for participating in the UN peacekeeping mission in Cyprus.
Vui asked Ambassador Eliades to convey his greetings to President Anastasiades.