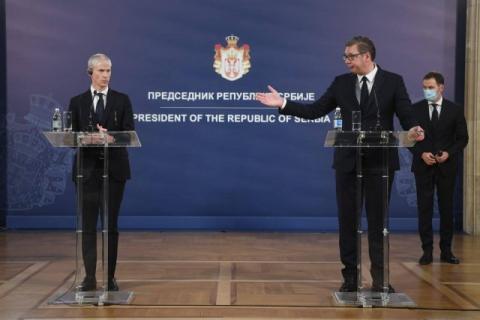 On this occasion, an Agreement was signed between the two governments on cooperation in the field of implementation of priority projects in Serbia. After that, press statements are planned.
The meeting, as previously announced, is scheduled for 11 am, in the building of the General Secretariat of the President of the Republic, Media Relations Office of the President announced.
President Vui pointed out that he especially appreciates friends who show their friendship under difficult conditions and circumstances.
"Thank you very much for coming to Serbia at the time of the strongest wave and the toughest blow of the coronavirus on Serbia and the whole of Europe, thus showing how friendly the French state, French President and French Government are to our country," Vucic said.
He told the guest from France that they are always welcome in Serbia. Vui said that the agreement is very important, because it will contribute to the modernization of the electric network, which, he says, has been discussed with "Schneider Electric" for a long time, but for various reasons, the agreement has not been reached and signed yet.
"Now the agreement has been signed, thanks to the determination of the President of France and the commitment of the French partners, as well as our hard work and progress," Vucic said.
He announced that the real construction works on the construction of the subway will start in a year.
"Work will be done on the first line that will connect Makis and Mirijevo. This is an important line, which will modernize Belgrade and contribute to the improvement of citizens' standards," the president explained.
The Minister of Finance, Sinia Mali, also spoke on that topic, who attended the signing of the agreement, and who...

New details on Miroslav Aleksić's case revealed: He has been abusing girls since 2008