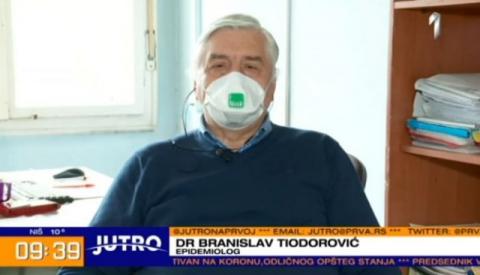 Before that, a reduction in the number of newly infected cannot be expected, he explained, because it is necessary for at least ten to twelve days to pass from their introduction to the first results.
"It is possible that we will celebrated New Year with a calmer situation," he said.
Asked how we came to the blackest statistics that we have 1.000 infected per 100.000 inhabitants, Dr Tiodorovi says that the medical part of the Crisis Staff pointed to that back in September and that they asked for rigorous measures to be introduced in October.
It was, as he says, a question of cafes and restaurants with those horrible videos, and "some seem to have replaced the economy with what is important, and that is health."
The member of the Crisis Staff also points out that it is clear to everyone that there is no health system without economy, but he still emphasizes "that priorities should be differentiated. The priority is production, and only healthy people can produce."
"This week will also be a tough weekend. The number that was mentioned by the WHO representative in Serbia (and he mentioned that the number of dead will be over 50) is accurate and it is a consequence of what happened in the whole of Europe, we are in focus now because it is happening in our country, while in Western Europe, it happened 14 days ago", Tiodorovi said.
However, he adds that what is happening in our country is a consequence of what was done. He appealed that all measures must be respected if we are to get out of this crisis.