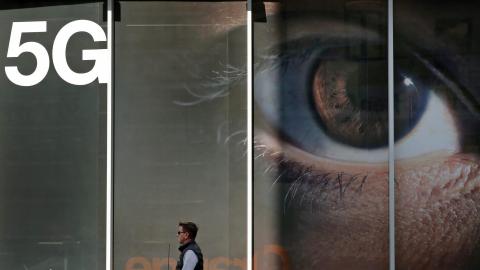 A Romanian man passes in front of a shop window of an Orange store that displays a huge 5G advertisement banner, in Bucharest, Romania, 19 October 2020. Archive photo: EPA-EFE/ROBERT GHEMENT

Chinese tech giant Huawei is fighting a fierce battle in Romania to stay in the game when it comes to rolling out 5G coverage in the country. A draft law is winding its way through Parliament which would implicitly exclude Huawei equipment from being used in the future networks.

Not surprisingly, Huawei seems to be pulling out all the stops in its efforts to prevent the law from being passed. In the process, it is also seeking to win over public opinion through the local media. The battle has also sucked in US Ambassador in Bucharest. Yet with Parliamentary elections approaching, there is an element of uncertainty as to if and when the law could be adopted. We examine in more detail.

Maia Sandu casts her ballot at a polling station during the second tour of presidential elections in Chisinau, Moldova, 2020. Photo: EPA-EFE/DUMITRU DORU

Rather unexpectedly, the pro-European Maia Sandu won a sizeable electoral victory against the incumbent Moldovan President, Igor Dodon, this November. There is no shortage of challenges and problems waiting to be tackled in Moldova.

Yet while expectations are running high among her supporters, there is also no shortage of obstacles facing Sandu in pushing through reforms. Not least is the current Socialist dominated Parliament and the prospect of her rival, outgoing President Igor Dodon, attempting to get himself elected Prime Minister. We analyse the...