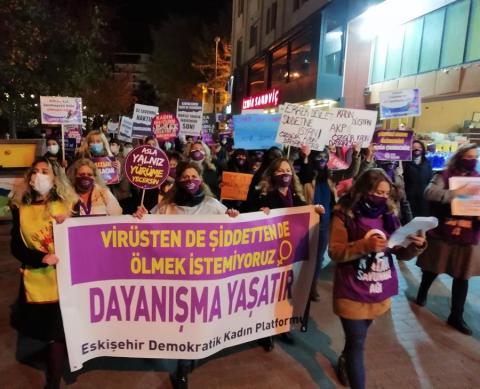 Women across Turkey marked the International Day for the Elimination of Violence Against Women on Nov. 25, highlighting that 354 women have been killed so far since the start of the year and how the pandemic conditions had left many trapped with their abusers at home.

Several hundred people gathered on Bahariye Avenue, which is one of the busiest pedestrian streets in Istanbul, to protest domestic violence against women. But they were stopped at the entrance of the square as they were not allowed to march.

Dozens of police officers, consisting mostly of female personnel, had set up pedestrian barricades in front of the protesters to prohibit them from marching.

A woman taking part in the protests told Reuters: "The law does not protect women as it should. We are here to make our voices heard. Femicides are happening almost every day in this country, but people who are committing the crime are walking free."

In the Aegean province of İzmir's Kıbrıs Şehitleri Avenue, women held posters reading, "Istanbul Convention saves lives" and shouted slogans, such as, "femicides are political" and "we will take our paid leave right."

The Istanbul Convention, a Council of Europe treaty aiming to combat violence against women, has been a subject of discussions over the past few months, with the Turkish government having said it wanted to withdraw from the convention.

The women who stood in protests against the deteriorating condition of women in the country and domestic violence have demanded the full implementation of the Istanbul Convention, according to a press statement made by the group following the march.

In the statement, requests were made to abolish the good conduct abatement in femicide cases...