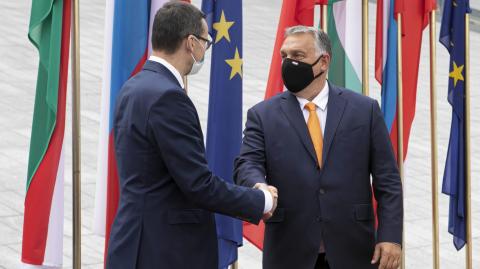 Orban, who believes in the power of narratives, said the debate is not really about the rule of law, but about the rule of the majority. "There are a number of issues where we have a dispute with the other EU countries, like on migration and gender, and this would mean they could force their interpretation on us in all these questions. Therefore, it is my patriotic duty to defend Hungary and its vital interests," Orban said at a press conference after his meeting with Morawiecki, where neither took questions.

Orban added that Hungary does not need money from the coronavirus recovery fund, and questions about the rule of law should not be linked with financial crisis management, which is a pressing issue for some of the other EU countries.

Morawiecki went further when he claimed that the rule-of-law mechanism proposed now by the German presidency and the European Parliament could even lead to the disintegration of the EU. "If we accept this mechanism, any other country could be attacked in the future -this a threat for the whole EU," the Polish PM argued.

The two politicians did not come up with any specific compromise to break the deadlock, though the joint declaration suggested either limiting the scope of budgetary conditionality in line with the European Council conclusions of July, or convening an intergovernmental conference to make modifications to EU treaties. The latter would obviously be a very time-consuming exercise with an unclear ending, and there is little appetite among EU members states - already grappling with problems like migration and Brexit - to see the issue get that far.

Earlier in the week, the German and French ambassadors to Poland, Arndt Freytag von Loringhoven and Frederic Billet, called for an end to the...