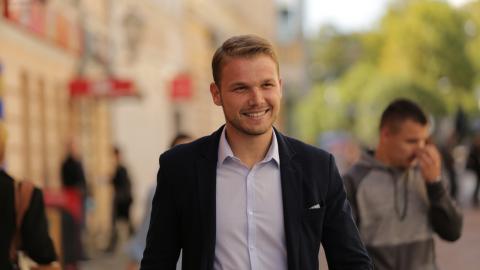 According to Stanivukovic, Dodik will try to change the regulations in the Republika Srpska, establishing the new position of city "manager" who would be appointed by the city council and hold all effective powers.

"That would be a reversal of the will of the citizens. In that case, the mayor will become a puppet without significant authority and I will not allow that," Stanivukovic said, adding that case he will call on the citizens of Banja Luka to come out on the streets and protest again.

It is the street protests against the RS government, which have been going on in Banja Luka for more than two years, that propelled Stanivukovic to victory and fame.

Many local experts and international officials see him as the first Bosnian Serb politician in decades to threaten the political dominance of the SNSD's undisputed leader, Dodik, who is now also the Serbian member of Bosnia's tripartite state presidency.

Some see similarities between Dodik and Stanivukovic, including a strong charisma, a feel for ordinary people, a knack for politics and apparently endless personal energy for political games.

However, experts and foreign officials also note the various controversies that already surround Stanivukovic, despite his young age.

They fear he may also echo Dodik's strong Serbian nationalism and radicalism. Some speculate that becoming Banja Luka mayor was not Stanivukovic's final goal, either, but just a stepping stone towards higher positions in the 2022 general elections.

In his interview for BIRN, Stanivukovic denied this speculation. Only the time will tell how his career will develop. Either way, Bosnia's local elections have suddenly turned him into one of the biggest public figures - and one of the biggest...